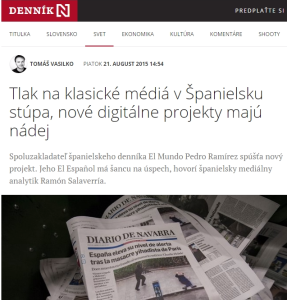 What do you think about El Español?
El Español is a very promising native online medium in Spain. Thanks to the size and experience of its staff, as well as to its financial strength, it is probably the most relevant journalism project launched in Spain so far. There are already some other online native media running in the country —notably El Confidencial and Eldiario.es—, which are well consolidated in the news market and enjoy a good reputation and influence. However, when these two sites were launched in 2001 and 2012 respectively, none of them elicited the interest that El Español has arised. It should be stressed, for instance, the fact that El Español has attracted so far more than 9,000 paying subscribers, before being launched. In my opinion, these details allow to expect a significant success of El Español when it is launched, somenthing that will happen in just a few weeks.

Who are main investors (except Mr. Ramirez?)
There has not been any public release about the identity of the main investors on El Español. It is said indeed that there are some corporations and politically influent people who have supported the project, but their indentity has not been disclosed. Besides that, what it is true is that there are thounsands of smalls investors who have supported the project by buying shares of the company.

Does it have a chance to survive?
I believe it does. Not only due to the financial strength brought by the around 18 million euros gathered from investors, but especially due to the time in which the medium will be launched. In 2015 Spain seems finally leaving behind the harsh economic crisis that the country has suffered since 2008. The State accounts are mostly stabilized and the GDP of the country is growing in a faster pace than most of the EU countries. At the same time, the private companies seem to be recovering and they have started to invest. This means that El Español will arrive to the media market in a moment in which companies will be willing to invest again on advertising, after years of cuts in their expendings. Therefore, I believe that El Español arrives to the market in a very timely moment: nowadays a great part of the Spanish citizenship is already composed by online media heavy users, and the economic growth gives promising expectations to new pure digital projects, while traditional media keep fading.

How typical Spanish media changed in last couple of years? Are they less free as Mr. Ramirez are telling?
It is true that media companies in Spain are weaker today than ever, since, due to the economic crisis, they have lost most of their former financial strength. This weakeness leaves them a bit disarmed in front of the hidden pressures that come from the big economic corporations and even from the national and local governments. However, I don’t think we can say that the press in Spain is less free than ever.

Can you give me an example of how corporations and/or the government press the media?
The pressures from the corporations come mostly from advertising expenditure: if one medium is critic against one of these big companies, it probably won’t expend anymore on advertising on that particular publication. This situation leads media companies to be extremely careful with what they publish about corporations, especially about the bigger ones. Additionally, since some of the Spanish media groups have accumulated billionaire debts with banks —it is the case, for instance, of Prisa group, publisher of the main general news national newspaper, El País—, they show a suspicious positive treatment when they cover their affairs.

The pressures from the government, both national and local, come mostly from the way the manage the public aids to the media, as well as the way they grant licences to broadcast. There is a general suspicion that ‘friendly’ media will be always better treated by the government in each territory.

Are new media successful? I read that there are 300 media start ups in Spain — quite a lot.
Actually, the amount is even bigger. According to the Press Association of Madrid, which set up an observatory of the professional crisis on 2008, since that year more than 400 new media projects have been launched in Spain. Of course, most of them are small or niche publications, and throughout the last seven years, there have been dozens of them that have been forced to close due to economic problems. However, there is a significant amount of media start ups –not only on the Internet, but mostly— that are doing pretty well. They have adopted new ways of financing, such as crowdsourcing, sponsorships, subcriptions and member clubs, among others. These new ways of financing, together with the traditional advertising income, allow them in most of the cases just to survive but, in some other cases, to set up quite wealthy projects.

How popular and successful is El Confidencial?
So far, El Confidencial is the most sucessful online native media project in Spain. Launched in 2001, according to ComScore, today it enjoys the third position among general news online media in the country, just behind the two bigger ones: the online editions of the national newspapers El Mundo and El País. El Confidencial, a site targeted to influent people, has become a very relevant player on the online media market, thanks to its exclusive news and thorough analysis on the economy and politics. Just one detail which gives an idea of its success and strength: in 2015, after a constant process of growth, it has reached a size of more than a hundred journalists in its staff. It is, of course, the first and only native online media to reach that size in Spain. Chances are that El Español will be the second one.